With tanned skin and strong muscles, Zhang Shupeng, 35, looks more mature than his age due to his long sun exposure.

Routinely leaping off high places and staying airborne for stunts, he has taken to extreme sports as a career since he first practiced parasailing in 2004. Now, he is touted in Chinese media as the "No 1 wingsuit flyer in Asia".

"There are quite a few wingsuit daredevils in China, but I'm the only one who excels at the sport," Zhang says, jokingly.

In mid-May, a female flyer plunged from a helicopter hovering over Tianmen Mountain in Zhangjiajie, Hunan province, but was found dead days later.

The horrifying news catapulted the niche sport into the limelight and also generated intense skepticism on social media about such sports.

Zhang, the first Chinese wingsuit flyer to compete in the World Wingsuit Championships and win a silver medal, recently spoke to China Daily about ensuring safety in extreme sports and the sector's landscape in China.

An experienced wingsuit pilot, Zhang doesn't appear to be a typical adrenaline junkie, full of flamboyance. On the contrary, the taciturn skydiver comes across as particularly meticulous and serious through his words.

He loves challenges but, from his perspective, that's not necessarily equal to taking risks. And he says he never tries risky moves beyond his capabilities. "I always feel there is no dangerous sport, only dangerous people."

The flyer follows his own rules: He only practices according to a strict regimen.

Zhang was one of the early adopters of the sport in China. In 2011, US pilot Jeb Corliss winged his way through the giant Tianmen Hole in the Zhangjiajie mountains, marking the entrance of the sport into China.

A year later, Zhang decided to try skydiving through wingsuit-flying because he was enchanted on the spot by the thrill-seeking "batmen" in the first WWL China Grand Prix races.

At that time, he was a member of China's national paragliding team, with eight years of flying experience. But the world-record-holding pilot chose to spread his arms and start from scratch.

To learn flying in a wingsuit, the pilot from North China's Inner Mongolia autonomous region flew to Arizona in the United States for base-jump lessons and learned how to parachute.

Zhang was finally able to do his maiden jump at Tianmen Mountain for the championship in 2016, a learning curve regarded as among the "fastest in the world".

He says, "When you follow the rules and improve step by step, it can be safe for you."

To bring the sport to more Chinese audiences, Zhang continues to promote himself on social media by uploading his free-fall videos and wide-angle photos, which usually receive mixed responses from netizens. Some hold the belief that he is being irresponsible with his life by doing such stunts.

Zhang says he is used to living with critical comments and doesn't let them affect him. His first impression of flying in a wingsuit was similar to how others react, deeming it a "madman's sport". His family was also concerned for his safety.

"But they later came to realize that I'm training scientifically, following strict rules and winning titles," he says. "Now, they neither agree nor object to my choice. I'm working hard bit by bit to change the opinions of those around me about the sport."

He says the often-quoted 30 percent death rate among practitioners of the sport is outdated.

"Due to immature flying techniques and primitive facilities, accidents happened frequently in the past. A recent survey shows the death rate is around 0.5 percent now."

According to him, roller coasters, drop towers and terrifying rope swings on cliffs in amusement parks, for example, are uncontrollable for participants, who might find no way out and are firmly tied to a machine they don't understand.

But a wingsuit flight is under the control of a pilot, with postures, direction adjustments and flying paths in place, which Zhang says can ensure a flyer's safety.

For most people, the glorious bird's-eye view comes along with the sport's deadly nature. Zhang takes the sport as a passion that he can strive for.

"I'm far from 'persistent' in doing this sport, which seems like it's in a relatively painful stage. I still love the sport very much, and I am willing to do it. Any regrets? Why? Never."

The seasoned flyer has reverence for the sport despite jumping off the cliffs of Tianmen Mountain time and again. Before soaring into the air, he is usually surrounded by onlookers, but he focuses on the details of flying.

Zhang also looks back on his flying videos to improve. The sport needs prudence to deal with extreme circumstances, so he isn't in it merely for the thrills, he says.

"I can't tell you my short-term aim now," he adds. "But I might divide my life into five or more stages and set a clear and specific goal for each stage."

His first stage in life involved paragliding, and his second is focused on wingsuit flying. He says he is proving to the world that Chinese people can shine in the field of extreme sports.

"I think one must seek something meaningful beyond one's own life. It could be a cause, a job or a sport."

This sport should not be performed without professional guidance for safety. 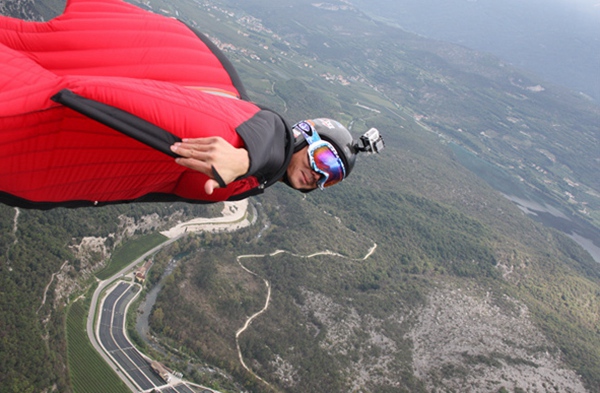 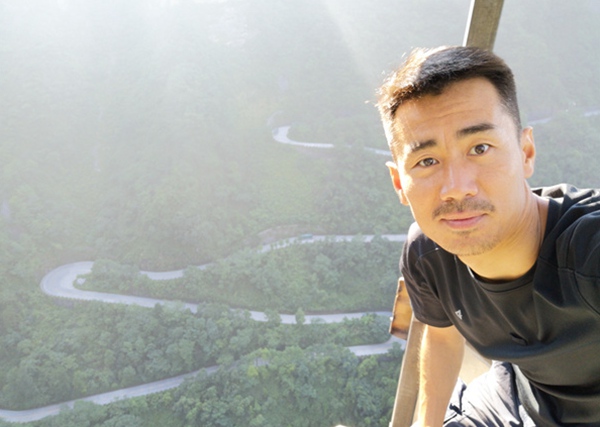 Zhang Shupeng is touted in Chinese media as the "No 1 wingsuit flyer in Asia". [China Daily]