Tourists in South China and Southeast Asia may find they do not need to go to the far north of China for a winter tour.

For them, Central China's Hunan province, which neighbors Guangdong, offers a cost-effective and convenient winter trip.

Geographically speaking, the province located in the subtropical monsoon climate zone seems short of anything that makes for a winter tourist destination.

But any Hunan native would agree that the province can be really cold in some winter days due to the frequent cold front from the north and its high humidity.

In some high-altitude, mountainous areas like Hengshan in the center of Hunan and Zhangjiajie in the northwest, the snow-covered mountains, and frost on trees are no less attractive than Northeast China.

The province is home to a number of ethnic groups and winter is an ideal time to observe how Spring Festival is celebrated by the Miao, Tujia, Dong and Yao people.

As a winter tour destination, Hunan has become increasingly popular with tourists, due to the promotional efforts of local tourism authorities in recent years.

It takes less than three hours from Guangzhou to Hunan's capital Changsha and about five hours from Shanghai to Changsha by high-speed train. 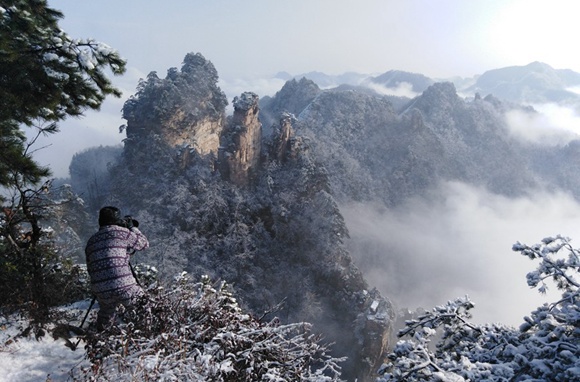 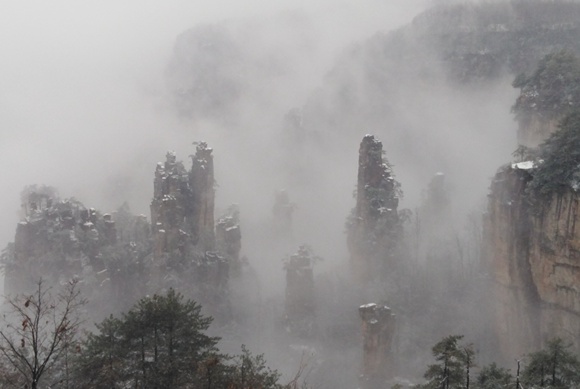 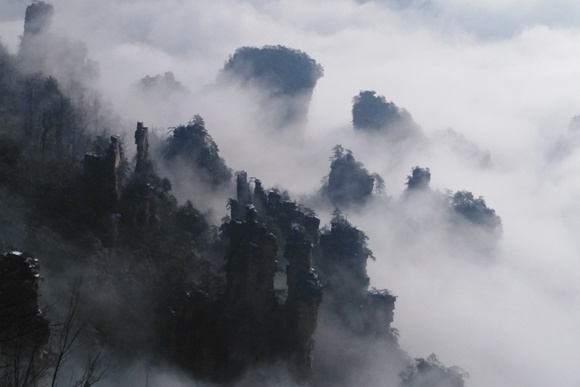 The city of Zhangjiajie recently kick-started a series of marketing campaigns for its winter tours.

"We hope to attract tourists to Zhangjiajie to watch its snowy landscapes, relax at its hot springs, have winter sports and experience local traditions," said Ouyang Bin, vice-mayor of the city.

The campaigns starting from Dec 1 this year and running until Feb 29, 2020, consist of more than 10 events.

Major events during the campaigns include a matchmaking event between local tourism companies and businesses from the rest of the country and the world, the opening of a skating venue at the Zhangjiajie Ice and Snow World park and Spring Festival and Lantern Festival celebrations at Tujia ethnic villages.

Winter was a traditionally slower season for tourism in Zhangjiajie, as well as Hunan province, several years ago.

To attract more tourists, the city launched the winter tour campaigns in 2016. The move has injected strong vitality into the local tourism industry, according to an official in the city's tourism bureau.

The bureau's statistics show the winter season over 2016 and 2017 brought in 40 percent more visits and tourism revenue than the previous year.

During the first 10 months of this year, Zhangjiajie welcomed nearly 48 million visits, marking a year-on-year growth of 17.8 percent. Its tourism revenue reached 66.73 billion yuan ($9.54 billion), up 22.5 percent from the same period of the previous year.

Zhangjiajie is known to tourists as a natural wonderland.

Its Wulingyuan scenic area has been included in the UNESCO's World Heritage List.

The masterwork of nature in Wulingyuan features thousands of sheer mountain peaks in red, clear streams and primeval forests, which are ideal habitats for rare animals and birds. The amazing landscapes have been a source of inspiration for the movie Avatar, which in turn has helped attract more tourists from the world to Zhangjiajie.

The city is worth a visit all year round. Flowers in spring, the cool weather in summer, the colored tree leaves in autumn and the snow-covered mountains in winter give tourists a glimpse of four distinctly beautiful seasons.

The 2019 Hunan (Winter) Rural Cultural Tourism Festival will open on Friday in the Baishuidong Scenic Area in Xinshao county.

The annual festival, sponsored by the Hunan Provincial Culture and Tourism Department, has been held in different cities or counties in the province, aiming to promote the tourism industry of the host region.

This year's festival will last through March 20. During the period, a number of incentives will be offered to tourists, including free tickets to the county's scenic spots and a reduction in transport and accommodation costs.

Located in Shaoyang city, Xinshao is praised by industry insiders as a rising star in the tourism industry in central Hunan. Its major attractions include the Baishuidong Scenic Area, Yuepingfeng Forest Park and the ancient Buddhist temples in Baiyunyan.

It takes only 45 minutes from the provincial capital of Changsha to Xinshao by high-speed train.

Huaihua, a city in the southwest of Hunan, also recommended its winter tour routes to tourists recently.

One of the routes is a two-day tour of the Xuefeng Mountains.

Xuefeng, which literally means snow-covered peaks, is among the highest mountain ranges in Hunan. Its snowy landscapes in winter are currently less known to tourists but are one of best in Hunan.

The Hongjiang ancient city along the Yuanjiang River has been a major trading port in the west of Hunan. Its well-preserved streets and buildings still stand as silent witnesses of hundreds of years' worth of booming commerce.

Zhijiang county in the west of Huaihua is remembered by many Chinese as the site where Japanese invaders surrendered to China on Aug 21, 1945. Popular attractions in the county include the Memorial Hall of Accepting Japanese Surrender, the Archway of Victory and the air force base of the "Flying Tigers", the legendary US air squadron led by General Claire Chennault who helped the Chinese forces fight the Japanese invaders.

Other attractions that Huaihua recommended to tourists include the picturesque landscapes along the Yuanjiang and Youshui rivers, the Dong ethnic villages in Tongdao county and its neighboring areas. 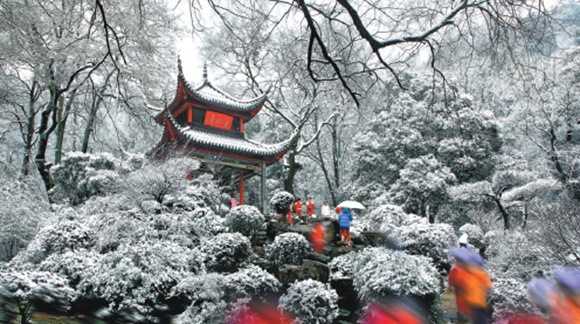 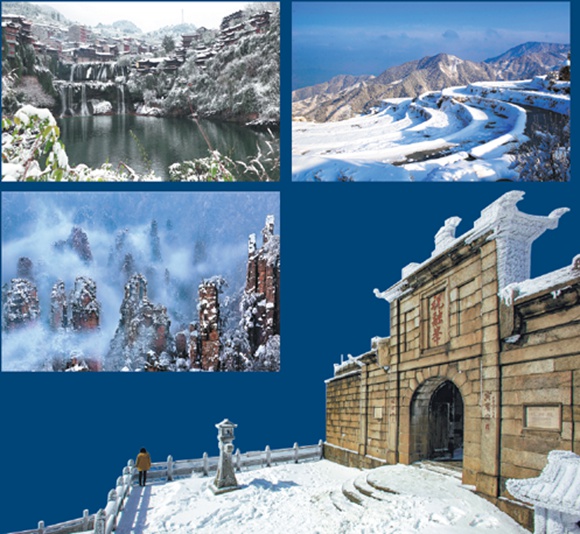 Clockwise from top left: The ancient town of Furong in Yongshun, the Xuefeng Mountains in Huaihua, the Hengshan Mountain in Hengyang and the Wulingyuan Scenic Area in Zhangjiajie are popular winter attractions in Hunan province.