April 25, 2015,Zhangjiajie tianmenshan's Mountain Elevator is opened，Following this, ZJJ Tianmenshan resort also opened up A, B two tours itinerary, visitors can not only greatly reduce the queuing time, and Visitors will be more efficient from the top to Tianmen hole.

This elevator runs throughout the mountain tunnel. From the bottom of Tianmen hole, can directly reach the Peak. The elevator, A total of 12 segments; length of 897 meters; the height of 340 meters; total span of 692 meters.It consists of 16 stations(30m large overloaded motor) and 3 stations(20m large overloaded motor). Transmission capacity is about 3,600 people/hour(Single-way).

A Itinerary, Tourists take the ropeway up to the top of mountain, then take the moutain elevator to tianmen hole, and take free bus back to city cableway station.

Note:You can get the tickets from Zhangjiajie city cableway station or Tianmenshan moutain gate. 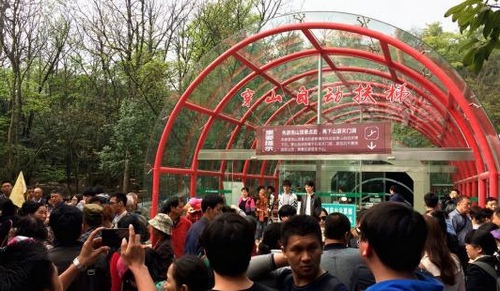