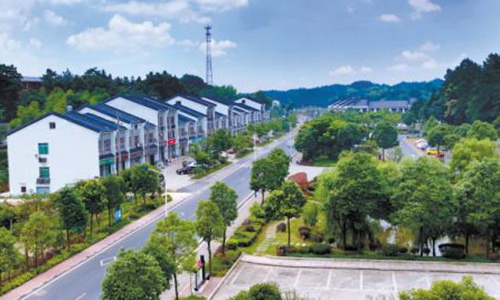 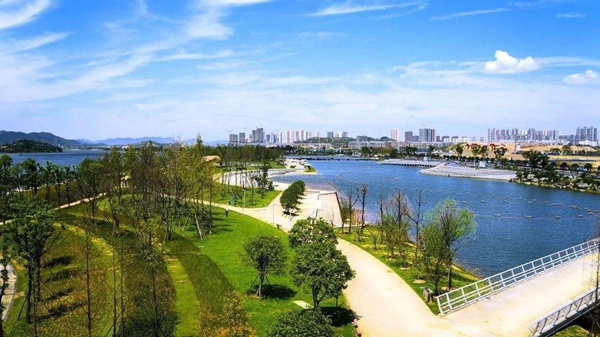 A cycling tour network has been built in the south mountain land and the north valley of Guangming Village, known for its original rustic charm.

A forest park and a natural oxygen bar, it features the 3 ,000 hectares Zilong Lake and its jade-like water, as well as a tourism line connected by several arch bridges. You can relax and refresh yourself amid flowery fragrance by riding.

80 kilometers to the northwest of Changsha, a 2 hours drive from Changsha. Go along Changsha-Changzhou Expressway, turn to Ninghui Road at Ningxiang Avenue.

North of the city

It is a modern ecological garden that contains garden research, flowers and nursery production base, scientific education center, gardening show, recreational activities and touring & resort facilities. At present, there are more than 20 kinds of flowers in full bloom in the garden, such as peach, plum, crabapple, cherry, and so on. In addition to the exquisite scenery, there are a number of outdoor activities for you to enjoy, such as picnic, expand training, fishing, etc.

In the urban area

Liuyang River Scenic Belt in Furong Distinct is built along the river. When cycling along it, you can enjoy not only the vast and grand Liuyang   River Square, and quaint Dragon Boat House, but also numerous small parks.

The section of Xiangjiang Avenue, south to Xiangfu Road Bridge. Cycling along the river to the south, you will be able to appreciate the splendid “ hundred barges vying over crystal blue waters, as well as a profusion of golden rape flowers.

South of the city

(Diagonally opposite to Changsha Flowers and Plants Market)

Meicun Avenue lies nearby Hunan Forest  Botanical Garden. It crosses the famous villa community in Changsha---Junyuanmei Village. Far from the city center, there are few motor vehicles along the route, making it fit for cycling.

With beautiful natural landscape, you can cycle in the tea garden spread over thousands of mou (one mu equals about 6.7 acre). It has the perfect subsidiary equipment because of its developed tourism industry. In addition, public bicycles are also made available for rent.

Starting from Xingsha, go straight along the route of S207 to Jinjing.

Forest-clad mountains and limpid streams complete the glamorous scene here. In the Piaofeng Mountain of the town, you can hear gurgling of the brook, and experience many strange stones and flourished green trees. On the top of the mountain, there are matin bells and vesper drums belonging to the Xuan Emperor Old  Temple. It definitely deserves a tour.

Go along the Jingzhu Motorway and get off at Kaihui  Town.

Cycling along Liuyang River in the urban area of Liuyang for less than an hour, you can feel the change of the landscape from a city to country, especially with the golden rape flowers blossoming out at both sides of Liuyang  River. Cycling along the river gives you the most splendid taste of the vicinity.

The urban bicycles leasehold system was put forward in Jan. 2012, in Liuyang City. So, even if you haven’t prepared a bicycle, don’t worry; A bike is definitely available for you.

The beautiful landscape in Dawei Mountain is known to all. Most importantly, it has the highest spot in Changsha of which the highest point reaches to 1600 meters. If you want to challenge the limits, this place is your only choice.

Starting off from the urban area of Liuyang, you can get there by following the Liudong Road.

Both spots are in the area of Gugang Town in Liuyang City. You should definitely not miss the dusk here, which displays the most beautiful Meitian Lake. At this moment, luminous colors reflected in the lake appear extremely splendid. Construction of the Baogai  Temple began in the Tang Dynasty, which is one of the fourth greatest ancestral homes of Buddhism in Liuyang.

Go along the Changyong Motorway till Liuyang, and turn to Liudong   Road.