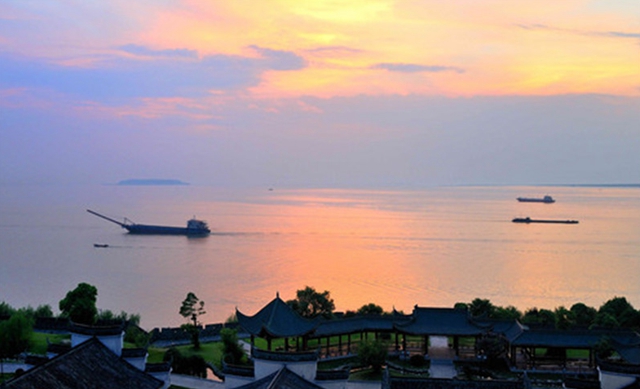 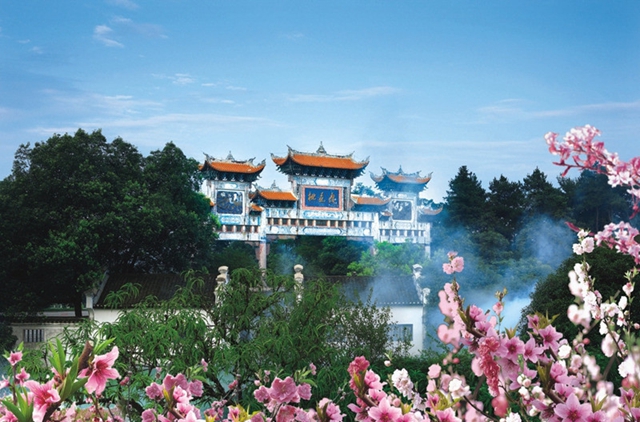 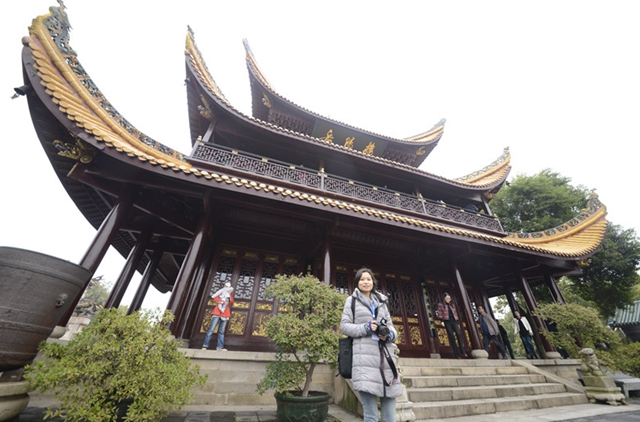 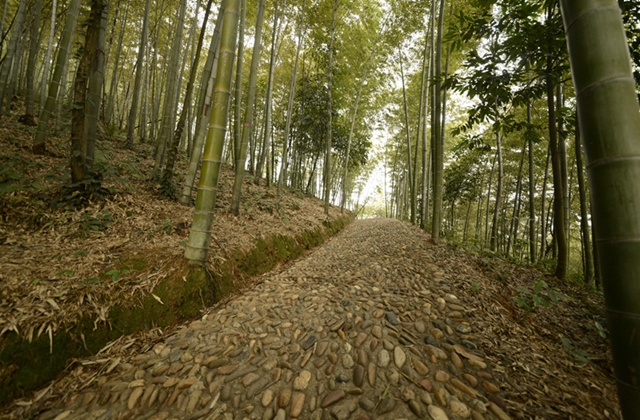 Yueyang Tower is one of the three greatest towers inChina, together with Yellow Crane Tower in Wuhan and Prince Teng Pavilion in Nanchang. The tower stands on the west gate of Yueyang city wall. Standing on the tower, you can overlook the vast Dongting  Lake. It is said the site was an inspection platform for the general Lu Su of the Wu kingdom to train his navel troops. There are numerous brilliant words by ancient literati, among which the most famous is the essay by Fan Zhongyan, named “Notes on the Yueyang Tower岳阳楼记”. In his essay he not only described the wonderful scenery of the tower, but also put forward a spirit “One should be the first to bear hardships, and the last to enjoy comforts（Chinse: 先天下之忧而忧，后天下之乐而乐）”, which encourage deep concerns for the country and people.(For a better understanding of the cultural background, please refer to the translation of the essay in the appendix).

The tower is special in its architectural structure. The main building is 15 meters high with 3 stories. Four wooden pillars support the whole building. No stone nor brick. The roof looks like a general’s helmet. On the left side is Xianmei Pavilion, named after an unearthed flagstone with plum blossom image by immortals. The flagstone is still standing in the center of the pavilion. The other two pavilions beside Yueyang tower are Sanzui Pavilion, named after the story of the immortal Lv Dongbin who drunk three times here in Chinese legend, and Huaifu pavilion, in memory of the great poet Du Fu and his poem “Climbing yueyang tower”.

Junshan island is a small island in the middle of Dongting lake, also named Dongting Shan or xiangshan in ancient times. It is regarded as the world 11th paradise place in Taoism, and a national AAAAA-class tourism area. The total area is not more than one square kilometer, but consists of 72 peaks. According to legend, there are 5 wells, 4 platforms, 36 pavilions and 48 temples on the island.

There are also many cultural heritages and historic relics. Such as the earliest carved stones discovered inChina, “Star cloud chart”, and Neolithic ruins. The spot bamboo is the testimony of the moving love of sister E Huang and Nv Ying to their husband Emperor Shun. Liuyi Well recorded the love story of Liuyi and the daughter of dragon king. It is said that the water level of the well is always higher than that of Dongting  Lake although it is very near the lake. And it is said the well is connected with Taihu Lake in Jiangsu Province thousands of miles away. In legends, Emperor Qinshihuang left his seal to arrogantly stop the strong storm on the lake. The flying bell is to remember the peasant uprising in the South song dynasty. Each scenic spot has a story or a legend.

Many literati left well-known poems and words praising this charming island. The most famous lines are by Liu Yuxi, “looking far away the Dongting lake is like a green jade, while Junsan is like a green shell in the silver disk” (Chinese: 遥望洞庭山水翠，白银盘里一青螺).

The Bamboo Sea scenic area is located in the Taohuajiang National Forest Park, covering a total area of 761 hectares. It is the largest ecological scenic area themed with bamboo in southChina, and has been considered as a must-see spot when you visit Yiyang. The whole scenic area is a good place for people to be close to the nature, and to get rid of noisy urban life.

The whole bamboo sea area consists of numerous hills, generally with a height from 100 to 250 meters. The highest peak and the lowest altitude are respectively 335 meters and 37 meters.

Along the road, our sight will be filled with green bamboos. Climbing to the red building at the top of the bamboo sea, you can overlook the whole area, appreciating the flowing wave of bamboo, listening to birds singing.

According to the development plan, Taohuajiang  Bamboo Sea will be built a demonstration base for ecological culture and tourism.

It's worth mentioning that bamboo has formed a typical culture inChinasince ancient times. The oldest archaeological findings of bamboo articles inChinacan be traced back to 7000 years ago. Early in the Shang Dynasty in 11th century BC, Chinese people used bamboo for household articles and weapons, such as bows and arrows. Before paper was invented, bamboo slips were mainly used for writing.

Bamboo is viewed as a symbol of tradition Chinese values. Ancient Chinese people designated bamboo as one of the “Four Gentlemen” of plants, together plum, orchid, and chrysanthemum. Bamboo's considerable resistance to stretching and its ability to support weight makes it a symbol of integrity, elegance and plainness.

Quzi ancestral temple is in the memory of Qu Yuan, the great patriotic poet we have heard in Yueyang. In the temple exhibits Qu Yuan’s masterpiece like Tianwen and lisao.

Taohuayuan is a national AAAA scenic spot. It is of significant historical and cultural value, for it was the origin of the story “The Peach Colony” written by Tao Yuanming, a famous poet in the Jin Dynasty (317-420 AD). (Please refer to the translation of the essay in the appendix).

Besides, Taohuayuan is one of the four holy places of Taoism inChina, together with E’mei Mountain, Wudang Mountain and Hengshan Mountain. The 35 caves and 46 paradise places there integrate the culture of Taoism, Buddhism and Confucianism.

Taoyuan Hill scenic area covers an area of 2.5 square km, with 10 scenic spots open to visitors. The area boasts splendid mountain scenery. A legend is told like that: long time ago, there was white fish demon stirring up big storms in the lake in front of the hill to flood farm land and even eating people and animals. A brilliant boy named Huang Wen subdued the fish but was trapped under the lake. Since then, people here live a harmonious life, and the landscape turns more attractive.

Taoxian Range covers an area of 1.5 square km, featured with idyllic scenery. As a romantic legend said, Zhinv, one of the seven fairy sisters, met cowherd Niulang here and they fell in love with each other. Because of the intervention of the Goddess of Heaven, they two can only meet once a year, on Qixi Festival – the Chinese Valentine’s Day, comes on the seventh day of the seventh lunar month. And Zhinv assigned the fairy of Peach Blossom to build here a fairyland on earth.

Qinren Village covers an area of 2.5 square km, boasting its 1000-meter-long bamboo corridor with Chinese classic elegance. The Qinren ancient cave connects to the Peach Colony where holds a good preservation of the folk houses, drama stage, water wheel in that ancient period.